It’s as close to proved as possible using today’s technology. Quantum entanglement has the cosmic dust that once was Albert Einstein spinning in its grave, or wherever Albert’s subatomic particles have dispersed to in the universe. OK, I admit to a little poetic license in that last sentence, or a lot of cosmic arrogance.

After all, I know next to nothing about quantum mechanics — the science around subatomic particles. So I walk into it cautiously. Please correct me in the comments below if I stray too far from a reasonable path. But I believe I have a knack for simplifying without destroying the facts.

Simple Fact #1: At the subatomic level, particles seem to do things that defy our logic about the world working in ways we can explain and predict. That’s why Einstein dismissed early quantum theories as supposing that God was playing dice with the universe.

Simple Fact #2: Einstein was particularly distressed by the concept of entanglement, which he called “spooky action at a distance” — the idea that particles, once entangled, remain connected even if they are no longer anywhere near one another. What happens to one particle has an effect on the other, an effect that manifests faster than the speed of light.

Simple Fact #3: Experimental evidence has tended to support the spooky theories of quantum physics, including entanglement.

So the point for a blog about religion is this: If at the subatomic level there is a linking and communicating force that we don’t yet understand, isn’t it logical to suppose that it works, too, on the macro level? The stuff we used to consider spooky isn’t so illogical — or unscientific — after all.

I have been avoiding writing about my own spooky stuff because I wasn’t sure what to call it. Now I’ve decided to call it that — spooky stuff. My most recent bout of spooky stuff happened, not surprisingly, around the time of my son Thomas’s death.

Early Monday morning, June 1, an uncomfortable dream woke me. It wasn’t a nightmare, but my anxiety level was more intense than any I can remember. I checked the time, and I remember it as a couple of minutes past 10 of 2, I’d never taken meds to help me sleep that close to my 6 a.m. alarm, but I knew my anxiety was too intense to get back to sleep otherwise, so I took a clonazepam, slept OK and awoke again with the 6 a.m. alarm.

At 7 a.m., the deputies rang the doorbell and delivered the awful news. Thomas had died in a skateboarding accident near his home in Charlottesville, Virginia, roughly 100 miles from our home in Loudoun County. Later, when the death certificate put the time of death at 1:53 a.m., it reassured me to feel that somehow Thomas and I were connected enough that I felt that intense anxiety at the moment of his death. 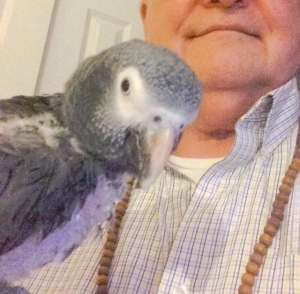 But it was not just Thomas and me in some sort of entanglement that night. Thomas had spent most of the day Sunday with a good friend we’ll call Sarah. Between 1:30 and 1:45 Monday morning, they and other friends, knowing that they shouldn’t drive after an evening of drinking, began to make plans to take a taxi home. Thomas ducked out to retrieve his skateboard from where he had left it, and he never returned. He apparently decided to use that means of transportation. Sarah, worried and frantic, tried to text and call him to no avail. When the Charlottesville investigators returned Thomas’s personal effects to us, there was this text from Sarah at 1:50 a.m.: “Are you alive?”

There’s a lot more, but let’s skip forward a couple of weeks. Neither my wife, Carol, nor I had the emotional will to read the scores of sympathy cards, which we placed in a basket in our family room. Finally, one Saturday morning, I sat down and read them all at once. As I was finishing, Carol joined me in the family room. I explained what I was doing and as I finished, I heard my timneh African grey parrot, Maxine, in her cage behind me say something I had never heard her say, and never have since. Wanting to confirm that I had heard correctly, I asked Carol: “Did you hear what Maxine just said?”

Timneh’s are smart and have great eyesight, but I don’t believe Maxine had been reading over my shoulder. I believe she was expressing the response of the universe to our loss.

It’s comforting and predictable to believe in spooky stuff after the death of a loved one, but that doesn’t mean the spooky stuff didn’t happen and didn’t mean what it seemed to mean. A universe with quantum entanglement can be a universe with spooky stuff, too. I believe we are all entangled and never have to walk alone.