Although my spiritual home is the Dzogchen tradition of Buddhism, my religious community is Unitarian Universalism, and I’m a member of the Unitarian Universalist Church of Loudoun (Virginia). For this morning’s service, the Rev. Phyllis Hubbell asked me to give a brief talk about the romance and the spiritual life in my marriage. This is the result:

My wife, Carol, and I have a mixed marriage.

She grew up Presbyterian. I grew up Jewish.

She grew up rich. I grew up poor. 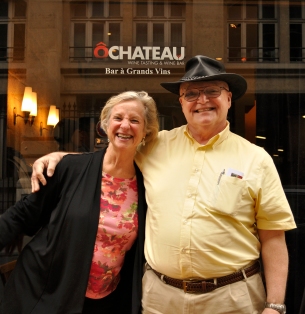 She’s a highly educated Fellow of the American Psychiatric Association. I’m a college dropout and past member in good standing of the Meat-cutters and Delicatessen Workers Union*.

In fact, we met at a new-member orientation at the UU Church in Reston (Virginia), my third UU church and her first. Part of my courtship of Carol was asking her to form and lead a children’s choir for a program I was in charge of at the Reston church. You’re welcome, Loudoun church. (That was in inside joke. If you’re new here you might not know that Carol runs our very successful children’s choir.)

When we announced our engagement at the Reston church, I explained, truthfully, that I had never said the traditional words, “Will you marry me?” What I did say was, “Will you join me in becoming a single pledge unit?”

Like good UUs, we learn from each other’s spiritual journeys and have evolved together in both Buddhism and Unitarian Universalism. I can’t say what Carol has learned from me, but I’ve learned from her a deep commitment to UU community life, and at times she has been my role model for treating the most annoying members of our communities with kindness (the least among us).

We would not consider living anywhere without a UU community to be a part of.

If you’d like to know how we kept our marriage intact, even strengthened it, after our older son, Thomas, died eight months ago in a skateboarding accident, it is in large part because of that deep, abiding love.

If you’d like to know how we held together and took some tough but effective steps to help our younger son, Carl, recognize and deal with his addiction three years ago, it was in large part because of that deep, abiding love.

If you’d like to know how we weathered the automobile accident that took the lives of my sister and brother-in-law five years ago, it was in large part because of that deep, abiding love.

*I could have used the American Newspaper Guild, but it was funnier this way.