Into a dancer you have grown
From a seed somebody else has thrown
Go on ahead and throw some seeds of your own
And somewhere between the time you arrive and the time you go
May lie a reason you were alive but you’ll never know
— Jackson Browne, For a Dancer

It was just two years ago today that my morning began with the doorbell. Two deputy sheriffs stood outside — a man and a woman. At precisely 7 a.m., I knew they weren’t there for anything routine. Maybe there had been a crime at a neighbor’s house and they were hoping my wife or I had seen something.

They asked if they could come in, stood respectfully, and the man said they had bad news. “Your son is dead.”

Neither of our boys was ill. Neither was suicidal. Neither, to our knowledge, took opiates. Neither engaged is particularly dangerous behavoir.

“Which one?” I asked, annoyed that maybe this officer had flunked the informing-parents class in cop school.

Thomas was our older son, 29 and single. He was getting a start in life while still enjoying the college atmosphere of Charlottesville, Virginia. We learned eventually that he had spent the previous evening drinking with good friends and set out to skateboard home. He fell from the skateboard, without a helmet, on a steep hill and was declared dead at the scene at 1:50 a.m. 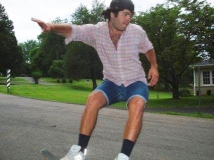 The next day, the words of the Jackson Browne song For a Dancer came to my wife, Carol, as she was out walking. She rushed home and asked me to find it and play it, loud. It became a sort of theme song for us in dealing with Thomas’s death, played or performed at both of the memorial services we held for him.

For me, the song says much about losing a child, or any close young person. We are born and grow on seeds planted, or simply thrown out there, by others. And as we go through life planting or throwing seeds of our own, we never know for sure what may grow from them. If you ask me the meaning of my life, I’d say it’s in the seeds (karma?) I’ve put out there for others.

Buddhism teaches that we all grow old, get sick, and die. That’s not true for young people like Thomas who die suddenly without ever aging or becoming seriously ill. To me, that’s the tragedy. Although he threw plenty of seeds while he lived, Thomas was deprived of the opportunity to age, gain more wisdom from his life’s experiences and the seeds of others, and continue to throw his own.

We all handle grief differently. I have handled mine by digging deeper into religion and spirituality and doing what I can to spread seeds, via this blog, via the Buddhist meditation sessions I lead, via my sermons in Unitarian Universalist churches. I’m proud of my younger son, Carl, and, while I wasn’t a perfect parent, believe that he is on the road to a happy and fulfilling life. He is spreading his seeds. And I’m determined to spread as many more seeds as I can, in part because Thomas cannot.

And, of course, we never know how our seeds might take root. A quarter century ago a young UU ministerial intern named Amanda L. Aikman wrote a sermon she called The Voices of All the People. It won a prize sponsored by the Unitarian Universalists for Freedom of Conscience, and I listened to it at the 1993 UU General Assembly. It has guided me since, in my desire to work for all those who come into a sanctuary seeking peace and refuge, even if they don’t share my political beliefs or the desire to work on the same social issues at the same time as me.

You will find a lot of that theme in what I have written and what I have stood for ever since. And, thanks to chance or the vibrations of the universe, I was able to connect with Rev. Aikman in recent weeks, so I could thank her and let her know that one of the seeds she threw out there took root, deeply. I’m sure than many others have over the years, and, as the song says, she’ll never know.

So I keep meditating, chanting, praying, reading, writing, and speaking with as much honesty as I can, tossing some extra seeds for those that Thomas can’t.