I believe that Kelly Gissendaner achieved confession and found redemption. As you probably know, she was convicted in 1998 and sentenced to death for the murder of her husband, which she is said to have orchestrated. She was 28 at the time of the murder, a survivor of prolonged and repeated sexual abuse in childhood. In prison, she found religion, studied and wrote on theology, graduated from Emory University, reconciled with her children, and ministered to her sister inmates. She is credited with giving them hope and preventing suicides. 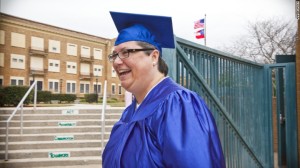 The State of Georgia executed Kelly Gissendaner yesterday, despite pleas from Pope Francis and many others for mercy. She sang Amazing Grace on the way to the death chamber.

Now it’s time for my confession. I believe that a just society would not kill prisoners for their crimes, so on principle I opposed her execution. But when I read about her roughly a year ago, I was not impressed by her turn to religion. I find jailhouse conversions to Christianity to be too easy. Living a solitary existence with little stimulation, the appeal of Christ the Savior may be a shiny lure without substance. Or at least that’s my bias. I didn’t resonate to her story, and I didn’t feel real empathy with her.

But today, after her execution, I read the excellent blog post Redemption, by the Rev. Lynn Ungar, and I learned that Gissendaner was, like me, a Unitarian Universalist. Now I felt empathy. And I’m beating myself up for having done the very sort of stereotyping I tell others not to do. I saw Gissendaner as an “other” until I realized she, figuratively speaking, wore the same kind of jeans as I do.

I’m also beating myself up for beating myself up. You see, I believe that we have to recognize and accept our biases before we can overcome them. Trying to do away with bias is like trying to stop the tides. They were and remain adaptive to some degree and live in our genes. If we embrace the biases we don’t want any longer and let them go, we can eliminate or minimize their effects. But if we deny their existence, it makes them stronger.

My experience with Gissendaner showed me that I’m struggling with my bias against the born-again type of Christianity. I’m so blind to it that I didn’t see it lurking in a situation that called for compassion. I saw a prison environment, a prisoner in solitary, and the State of Georgia, so I labeled Gissendaner one of those “other” Christians and turned off my empathy. My bad. And my lesson, my learning moment.