In general-use English, “attachment” and “aversion” don’t necessarily amount to a big deal, but Buddhists often use those words for something deeper. Similarly, in everyday use, “karma” may simply represent “what goes around comes around,” but Eastern religions give it a more specific spiritual meaning. We depend on the context to infer the importance.

I have a story to tell you today about attachment, aversion, karma and a grand piano. I’ll leave the interpretation up to you.

Once upon a time, a man we’ll call Mel and a woman we’ll call Carol lived in a big house with a big front yard and an even bigger back yard in a land we’ll call Telegraph Spring. A blizzard one January left 3 or 4 feet of snow on the ground, and some of the snow was still there five weeks later. In the meantime, the melted snow and a fierce rain formed attachments with the earth and resulted in mud and muddy ponds. 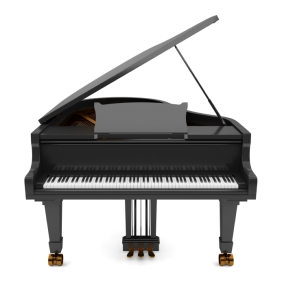 Carol and Mel were attached to their home and the land around it, but they knew the time had come to downsize — move to a smaller house. Carol was especially attached to her grand piano, which she played every day. She had bought it with funds from her mother’s estate eight years earlier, so she considered it her mother’s last gift to her. It was beautiful and sounded great, but there was no room for it in the new house. She bought an upright piano to replace it and put a for-sale ad on Craig’s List.

Because technical damage impaired the piano’s long-term value, Carol put a reasonable price on it, and an eager buyer appeared, attached to the idea that his 11-year-old son had to have a grand piano. He didn’t want to wait for the weekend to see it but came to Carol and Mel’s home on a Thursday night at 8. His son got magnificent sound from the instrument as he played two advanced pieces beautifully.

About 10 minutes after the man and his son arrived, the doorbell rang — piano movers the father had already hired. The dad gave Carol an envelope filled with $100 bills, and the piano was theirs.

Except for one thing. The three piano movers were adverse to actually knowing anything about moving pianos. They hadn’t realized how heavy a grand piano is, so they didn’t bring a dolly to wheel the piano to the truck. They also didn’t bring a socket wrench to remove the piano’s legs.

Carol and Mel lent them a socket-wrench set but after an hour of discussion on the best way to the truck without a dolly, Carol and Mel became adverse to further involvement in the story of the sold piano. Mel is especially adverse to lingering goodbyes.

Now is when karma enters the tale, as well as perhaps a lack of compassion on Mel’s part. Carol went to sleep around 10, and when Mel headed to the bedroom around 11:30 he saw that the piano movers were still in their front yard. It seems that they had tried to back their truck up over the front lawn to the front door, and all of the truck became quite attached to the muddy swamp there. In a word: stuck. And a large object was lying on the muddy lawn near the rear end of the truck. It was just the size of a grand piano without legs wrapped in the protective blankets that movers use. Mel continued on to bed.

Then another dose of karma. With Carol and Mel attached to their sleep, the phone rang at 1:45 a.m. The deputy sheriffs asked them to come to the front door. The movers had just managed to extricate themselves from their attachment to the front lawn, but a neighbor, fearing a burglary, had called law enforcement. We — I mean Carol and Mel — explained that it had not been a burglary and went back to sleep.

They wish to transfer their good karma to the piano, so that it stays healthy and sounds wonderful as the 11-year-old prodigy develops his talents.