The photo shows me crossing the finish line of the 1980 New York City Marathon. I was 34 years old, and my time was around 3 hours and 55 minutes. It was my third and last marathon. 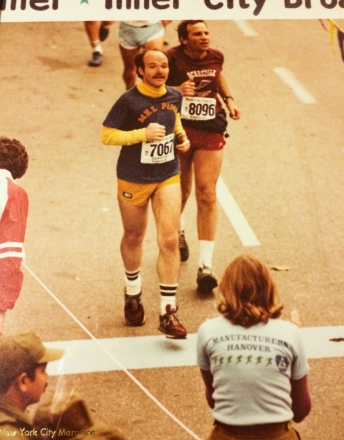 I started thinking about this picture for a few reasons. I’ll be ending a 10-year marathon at the end of December as I sell the insurance business I started from scratch on December 1, 2005, and built to more than $4 million a year in premiums. And at the same time I’ll be ending a 56-year marathon of working in the interests of another. I’ve been working for others — bosses, clients, customers, insurance carriers — every day of my life since I was 13, except for a year or so when I was in my 50s, unemployed and working hard to find employment.

I don’t think of it as retiring, because I’ll be devoting full time to my writing and other forms of expression. In addition to this blog, I have a book or two in mind, I’ll be recording some meditations, and I’ll be available for speaking and consulting. But for the first time in my life, I’ll be doing exactly what I want to do and hoping to make some money from it, as opposed to doing what I need to do to get paid. So that very long marathon is over, and I feel a freedom I have never before felt.

I learned much from running.

When I started running, most of my experience had been with short-term projects — writing and editing newspaper articles, corporate advertising, brochures, speeches. Training for and running marathons taught me about meeting long-range goals step by step. If you’ve never run a marathon, have someone drive you 26.2 miles one day and look out the window at all the scenery as you pass. You’ll see why I call it a long-range project, and for me to do it meant months of daily training, including one run a week of between 18 and 22 miles. In the last few miles of every marathon I ran, I reached a point where I had no idea why I continued putting one foot in front of the other. I knew only that I was determined to do it.

Running also taught me about impermanence, and that’s another reason that the photo came to mind. If you’ve seen me lately, or a photo of me, I look nothing like the 34-year-old crossing the finish line in the marathon shot. I have much less hair, much more fat, and I’m even an inch or two shorter. In fact, only a tiny fraction of the cells in the body of that 34-year-old remain in me now that I’m 69.

And only a tiny fraction of the cells in that runner’s body were in the body of the 5-year-old in this photo. It was my first, and only, appearance as a nightclub singer. That was decidedly an impermanent career.

Although the self is impermanent and an illusion, there is a something that is mine and consistent. I’ll call it my soul, although that’s not a very Buddhist concept. It’s the essential me that persists through change and just maybe will never be gone from the world.

That 5-year-old was singing The Tennessee Waltz, a song about romantic impermanence. In the audience and also performing that night in 1951 was Tommy Dorsey, who would die a few years later. The 5-year-old had no idea that his own father would get sick and die before six more years had passed.

He had no idea of the tragedies he would experience, or of the triumphs. He never dreamed that he’d know three murderers and run three marathons, that he’d marry and raise two sons, that he’d have four hip replacement surgeries and three hip dislocations before his 61st birthday, that he’d be published in The New York Times, that he’d become a lay preacher in Unitarian Universalism and a lay teacher in Buddhism, that at 69 he’d be in constant pain in two more joints, with shoulder-replacement surgeries in his future.

And he had no idea of the great freedom he’d attain on New Year’s Day 2016, the freedom to be exactly who he wants to be and to live out his life writing with total honesty.

When I went looking for a song to end this post, I thought of You’ve Changed, and discovered this version by Eva Cassidy. She died of cancer at the age of 33, less than two years after this performance. If you are not familiar with her and her story, do yourself a favor and watch this segment of ABC’s Nightline.